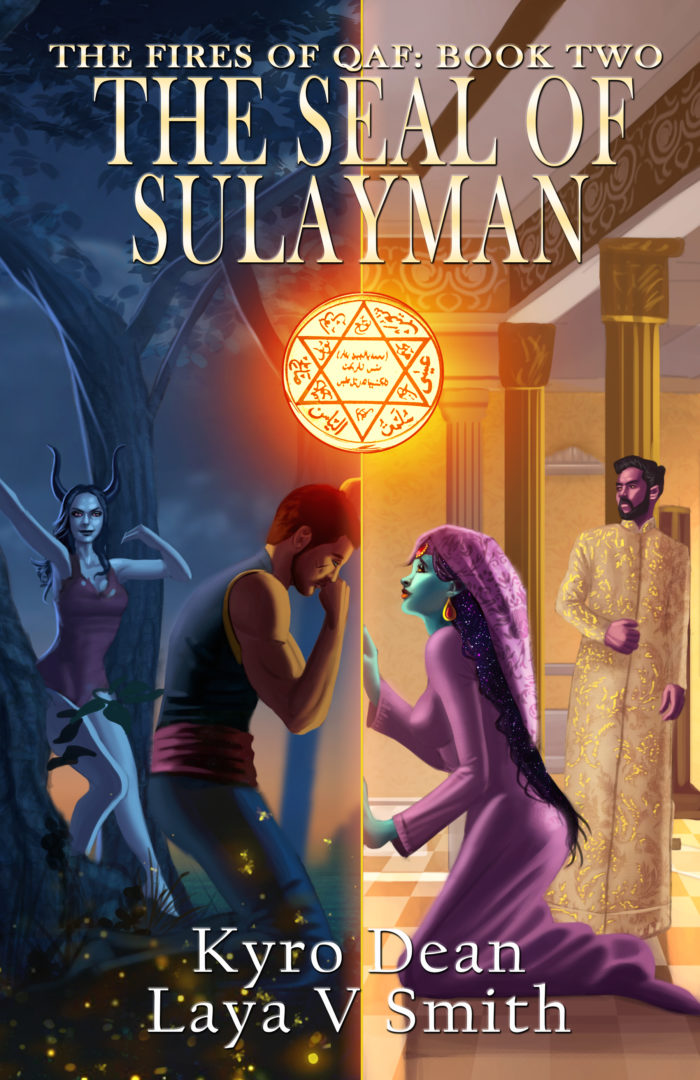 The Seal of Sulayman

When a charismatic general is saved from death by a cruel demon, he returns home to find his feelings for his old flame still burn hot, but that the demon’s feelings for him might burn hotter.

A half-human living in the world of djinn, General Bakr has always felt like an outsider. After two grueling years at war, Bakr is anxious to return to Earth and bask in the sunlight among his own kind. When he is reunited with his first love, Sheikah Sezan of Shihala, he realizes he still has feelings for her. But Bakr returned from the war with more than scars. A demon has made him her pet and the last thing she wants is to see him rekindle his old flame.

Sheikah Sezan, disenamored by her former love’s abrupt departure and equally sudden return, is forced to come to terms with the terrible deal she made with a demon to keep him alive while at war. The demon, having kept up her side of the bargain, comes for Sezan’s magic djinn fire as payment, but soon makes it clear she had no intention of giving up Bakr. Determined to save herself and Bakr from torment, Sezan sets out to find the Seal of Sulayman, a magical talisman that controls all magic.

The demon torments Bakr and Sezan, weaving a web of deception to keep them apart. With rival courtiers, monsters, a clever sphinx, and both of Allah’s worlds working against them, only trust can rescue Bakr and Sezan from the demon’s caprice. But communicating enough to trust each other is a difficult task when words ruin everything.

1 Review for The Seal of Sulayman

Bakr grew up a human in the djinn world of Qaf, scraping by until he made friends with Jahmil Amir and rose through the ranks of Shihalan royalty.

Sezan bint Malik Bajul is Shihala's top-ranking princess. Determined to find her place in Shihala on her own merits, she studied seals and contracts in the country of Elm in hopes of becoming an ambassador.

She's sassy, strong, devoted, analytical, and has a penchant for making terrible choices despite her best efforts.

The only surviving prince in Ahmar's court and advisor to Queen Qadira. He's well-read, cordial, handsome, punctual, obsessed with the legends around The Seal of Sulayman, and has an eye for Sezan.

Grey-skinned shaytana is a powerful lilith who makes deals with Sezan and tortures Bakr in The Seal of Sulayman. Qaf, or a sunless land whose skies crawl with eight moons, is where a majority of the story takes place. Shihala, the home of Jahmil Amir and Ayelet Amira, Bakr's best friend and Sezan's family. The country just finished war with Vespar and is returning to normalcy. This includes repairing relations with their northern neighbor, Ahmar, and the vindictive Queen Qadira. A task for only the most committed ambassador.

The floating island of Eayima is a sacred place protected by Allah and kept from both djinn an humans alike. It is located above the oceans in Ard (earth) and can only be accessed by flying the mythical Rukh bird.

Its landsacape is barren except for twisting grass and a smattering of strange bushes and trees. An abandoned temple lies in its center and protects the Seal of Sulayman, a talisman that can control all magic in Allah's both worlds. Guarding it is a sphinx and the promise that the seal is such a temptation it will end both worlds.